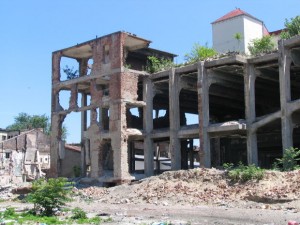 Good community funding practice is to never collect less than the full amount.  There is a reason for this.  Collecting the appropriate dues once is much easier than collecting it two, three, or even four times.  Additionally, in a tough economy someone may be up-to-date with the dues initially, but then could lose a job and fall behind or stop paying dues altogether.

No Room for Errors with Partial Funding

Another reason partially funding reserves is a bad idea is it leaves less room for errors or contingencies.  If the roofs in your community needed to be replaced two years earlier than you planned and you were trying to fully fund it all along, then it turns out to not be a big deal.  You may either get a small loan or possibly tap into your pooled reserves.  However, with partial funding, this turns into a much bigger problem, one that will result in a special assessment.

When funding reserves, you can either pay now or pay later.  Paying now works much better because payments are kept at relatively stable levels over a long period of time.  This also creates an equitable way to fund reserves.  By paying later (which is what partially funding reserves is), you are going to get hammered with a lump-sum payment.   If a special assessment is required (let’s say for roofing) then the best option may be to spread the special assessment out over the year.  In this case, this would be possible because a big roofing job would not likely be paid all at once.  You could pay them some money to start the job and other monies when they complete a certain portion of the project.

Here is an example of why special assessments are a bad option, unfair, and inequitable.

A typical shingle roof has an expected life when new of 20 years.  Costs for the next roof replacement essentially start immediately because the roof starts to wear out soon after it was put on.  However, if your association is not funding for the next roof immediately, then their funding is being done in an inequitable manner.

In this example, let’s say that this community doesn’t fund reserves and only issues special assessments when necessary.  Imagine if someone has lived in this community for one year before a new roof is needed.  Let’s say this resident bought the property from someone who lived in the unit for 19 years.   This means the current resident has to pay all 20 years’ worth of roofing costs and he only lived there for one year!  It also means that the previous resident got to live with a free roof for 19 years!  This shows why funding reserves (equitably) and doing long term planning for a community are so important.  It also shows that partially funding reserves or just issuing special assessments to pay for items is unfair.

Getting a professional reserve study is always a good investment for your community.  By doing this, a trained reserve specialist (RS) will weigh in on the funding plan impartially and help get your community on its way to properly funding their reserve accounts.